AACF is an idea whose time has come. I'm a believer that we African-Americans can do this ourselves.

The African-American Community Fund (AACF), a component fund of The Dayton Foundation, offers donors an opportunity to create a legacy that will benefit the community for many generations. 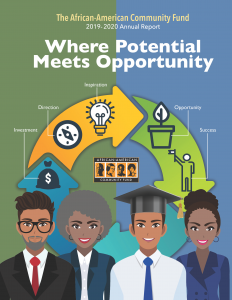 See how the African-American Community Fund made an impact in Greater Dayton during the 2019-20 fiscal year. Download our annual report >>

Apply for a Grant

The AACF will not conduct an open call for applications this year! If you have questions about AACF's grant making process, please contact Lucy Baker at 937.225-9960 or email at aacf@daytonfoundation.org. Click "more information" to learn how to apply.

The African-American Community Fund (AACF) began in 1992 under the leadership of Dayton Foundation emeritus Governing Board member and former chair John E. Moore, Sr. and former member Lloyd E. Lewis, Jr. At that time, AACF served as an umbrella to more than a dozen funds earmarked to address specific needs within Greater Dayton's African-American community.

Today AACF houses more than 180 current and deferred funds, benefiting a variety of important areas, including civic, economic, cultural, educational, religious and human service initiatives. Recognized as a national model for the promotion of philanthropy in the African-American community, the fund offers African-Americans an opportunity to create a permanent financial resource for generations to come.